Have you ever watched a Japanese TV drama? Using them to learn Japanese is beneficial to acquire natural expressions. You can learn Japanese daily conversations, such as talking with friends, discussions at the workplace, attracting a man/woman, and so on through watching dramas. You are certainly able to learn it by watching Japanese movies. However, making a habit of watching a movie is not easy because it is too long (it normally takes two hours). Compare to movies, a Japanese TV drama is easier to bring in your daily life because it takes approximately 40 minutes to an hour. Even if you watch it every day, it is not stressful, so that it is a good way to study Japanese.

However, you cannot get an effect immediately by learning with drama. Compared to other study methods, you need continuity. It is important to continue for several months to a year without giving up. As continuing, your Japanese vocabulary increases so that the listening comprehension will improve as well.

On this page, our non-Japanese staff introduces how to learn Japanese with drama. What is the most efficient study method? What are the important points of learning? We will answer your questions. Moreover, we introduce subscription video on demand (SVOD), which includes Japanese drama, movies, and animes. If you are learning Japanese and would like to improve your listening skill, please refer to this article.

How to Select a Japanese Drama for Learning

You may have no idea which Japanese drama you should watch at first because there are various types of stories. In this case, we recommend watching comedy-dramas because the stories are simple and also entertaining. You may be able to continue for a long time without getting bored. If you are not interested in comedy at all, you should choose your favorite genre's drama.

It is important to select an enjoyable drama, especially beginners and intermediates because you have to watch it repeatedly. Watching uninterested drama repeat and repeat is boring. Eventually, it decreases your motivation for studying Japanese.

A drama that reflects daily life is good for learning Japanese. Even though historical, medical, and legal dramas are highly entertaining, they are not for Japanese beginners because those dramas include ancient terms, which none of modern Japanese use, or difficult technical terms. Following drama titles: "The Japanese The Japanese Don't Know (Nihonjin no shiranai Nihongo)", "Nigeru wa Haji da ga Yaku ni Tatsu", and "Overprotected Kahoko (Kahogo no Kahoko)", are suitable to learn Japanese. If your Japanese level is higher than intermediate, we recommend you try to watch "Haken no Hinkaku", "The Concierge (Hotel Concierge"), and "Attention Please" whose dramas set in the Japanese workplace. As enjoying watching drama, you can also study the culture of Japanese business, and the way of using polite language (keigo).

Although the lines in Japanese dramas are mostly standard Japanese, they speak in dialects when the drama set in a rural area. The dramas with many Kansai accents or other dialects are not suitable for studying Japanese. For example, "Amachan", "Carnation", and "Yae no Sakura" are popular dramas, but you should avoid them due to dialects.

The commonly Japanese drama has about 10 episodes. You do not have to watch all the episodes repeatedly. You can gain a sufficient leaning effect by watching only your favorite scene or episode. If you do not have enough time to watch a series drama, we recommend a drama that complete one episode. When learning Japanese with Japanese drama, please refer to the following steps below.

Enjoy the drama with Japanese subtitles to understand the story and lines.

As watching Japanese subtitles, check the words and expressions. If you find a word or expression you cannot understand, stop the video and write it down immediately.

Look up the definition of words and expressions you have written down. After you understand it, watch the drama again with Japanese subtitles. Make sure how the characters use those words/expressions in the conversations.

Choose a character with the same gender. Speak as overlapping the character's line.

Watch the drama as listening to the lines without subtitles.

For Japanese beginners, it is important to get used to the intonation and the speaking speed of the Japanese natives. Japanese beginners without having basic Japanese knowledge cannot gain sufficient learning effects unless there use subtitles. It is because they recognize Japanese as only sounds. If you cannot catch Japanese, you should watch it with Japanese subtitles. If it is still difficult, you should try to watch animes or programs for kids, such as "Doraemon", and "Chibi Maruko-chan".

For Japanese intermediate skills, it is important to catch a short sentence thoroughly. If there is a line you cannot catch at all, go backward, and confirm each word. It is difficult to listen to all the words at once, so you should attempt to catch 30 to 50 percent of the sentence.

For advanced Japanese learners, we recommend watching a drama without subtitles. As displaying the subtitles, you might rely on it and read it, so you cannot practice listening skills. Let's acquire the natural expression by checking not only the vocabularies you do not know but also listening sounds and nuance of the end of the sentence.

This SVOD is strong in both Japanese and overseas TV dramas. The monthly fee is 1,026 yen (tax included), and you can watch more than 70,000 videos without any additional charges. In addition to popular Japanese dramas, they provide the latest episode. Moreover, they provide Japanese popular animes, such as Chainsaw Man, SPY×FAMILY, Gintama, NARUTO, and Pokémon, Chinese, Korean, American, and European dramas. You can save favorite videos to 'My List', so it is good to make a list for learning Japanese. The service is available with PC, smartphone, and tablet. There is a free trial for two weeks. If you live in Japan, you should consider using it.

The amount of content such as Japanese dramas, TV programs, movies, and animes is overwhelmingly large. In addition to PCs, smartphones, and tablets, you can watch videos on TVs produced by Sony, Sharp, Toshiba, Hitachi, and LG. Even if you change the viewing device, you can easily play the remained part, so you can efficiently use the travel time to study Japanese. They contain not only Japanese dramas but also popular Japanese anime such as Fuuto PI, One Piece, Fullmetal Alchemist, Yu Yu Hakusho, and Slam Dunk. The monthly fee is 2,189 yen (tax included), and you can watch as many videos as you want, in addition to magazines, comics, and e-books. By paying an additional fee, you can also watch popular movies such as Star Wars and Shin Godzilla for rent. Currently, U-NEXT holds a limited campaign now; you can watch most videos, and magazines for 31 days without paying, and also receive 600 yen points. Please check this service if you want to study Japanese with dramas.
*You can use the points for the not-free videos.

AbemaTV is a free VOD service jointly operated by CyberAgent and TV Asahi. It provides various genres of videos such as Japanese drama, Japanese movies, Japanese anime, Chinese drama, Korean drama, sports, music, original programs, news, etc.
It owns about 20 channels, and you can watch all the broadcasting programs. You can also watch some missing programs after the broadcast ends. Registering for ABEMA Premium with 960 yen (tax included) per month releases all videos. The first registration for ABEMA Premium gives you two weeks free trial. There is no charge if you cancel by 13 days after registration. When the cancellation deadline has passed, it automatically charges the monthly subscription of 960 yen (tax included).
You can add the programs to the list. It is a good idea to create a drama list for studying Japanese. There is a helpful notification to inform to start the broadcasting programs. You can send and view comments to some watching programs. In addition to a PC, you can also watch from your smartphone or tablet. This service is recommendable for foreigners who attempt to study Japanese with Japanese dramas.

This is a SVOD service jointly funded by TBS, TV Tokyo, WOWOW, and others. The number of Japanese dramas delivered is the largest among the video-on-demand services. Not only the popular dramas of TBS and TV TOKYO are missed, but also the dramas with a high audience rating and the original dramas that can only be seen on Paravi. The Paravi Basic Plan provides unlimited viewing of dramas, movies, animes, variety shows, economic programs, and live broadcasts (live streaming) for a monthly fee of 1,017 yen (tax included). Be careful that it takes 1,050 yen (tax included) if you pay for iTunes Store. Other than that, rental video costs separately, but you can receive one rental ticket every month if you contract for the Paravi Basic Plan. Using the ticket, you can watch movies and dramas that usually take an additional cost. You can register as a member via your email address, Facebook, Twitter, Google, Apple ID, Yahoo! JAPAN ID, or NIKKEI ID. You can easily enjoy HD-quality videos on multiple devices, such as PCs, smartphones, tablets, and TVs so let's try to use this service if you live in Japan.

Japan's leading TV station FUJI TV provides this SVOD service. In addition to TV dramas, variety shows, animes, and movies, they also provide original programs, live performances, and live sports broadcasts. They provide both past popular TV dramas and the latest missed episodes, which are now on air. If you become a premium member, which costs 976 yen (tax included) per month, you can also read magazines and mangas unlimitedly. The premium membership enables to purchase e-books. FDO is worth considering for foreigners who are thinking about continuous Japanese language learning at a reasonable price. You can register as a member via your Amazon account, Rakuten ID, Yahoo! JAPAN ID, Docomo ID, au ID, or SoftBank ID, and you can also use it from your PC, smartphone, or tablet. Not only those who want to enjoy Japanese Fuji TV dramas and animes but also foreigners who want to study Japanese with Japanese TV dramas should check it out.

WATCHA, called the Korean version of Netflix, is a popular VOD from South Korea. It also provides the service in Japan. It delivers various attractive works; Korean dramas, Japanese dramas/movies, Hollywood movies, and overseas dramas. The most notable feature is AI analysis to recommend ones you will love referring to your reviews and evaluations. As you post, AI gets more accurate so that you effortlessly find what you love. Although there are few streaming Japanese dramas, it has a rich lineup of minor works and masterpieces that others do not provide.
Compared to others, the monthly fee, which costs 869 yen (tax included), is lower. It supports PC, smartphones, and tablets to view all videos. It also supports video downloads so that you can watch offline. They provide a one-month free trial, so those who would like to study Japanese with Japanese dramas should try it. In addition, if you also want to enjoy entertainment, such as Korean dramas and Hollywood movies, this is a good choice. 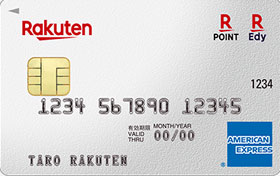 Rakuten Card does not cost anything for neither admission nor annual fees. Even foreigners comparatively can get through the examination for this card. In each time you shop at online shops at Rakuten with Rakuten Card, you get three times points. You can exchange the gained 1 point to 1 yen. It is available at Rakuten shops, and also able to exchange other company's points, such as Rakuten Edy, ANA miles, and so on. You can apply online. By the campaign, you can receive 5,000 points if you newly apply and shop with the card.